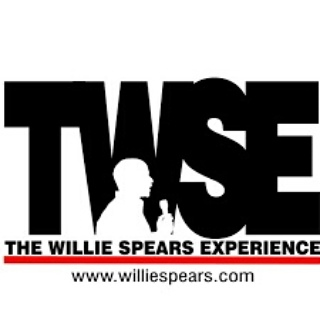 Speaking to thousands each year, his goal is to add value to the life of the listener. In the past few years, Willie has spoken to thousands of people across the country at events in Georgia, Alabama, Florida, Kansas, Oklahoma, Hawaii, New Mexico, Arkansas, New York, Idaho, and Alberta, Canada.

Willie has spent time as an entertainer working for Disney Cruise Line as a disc jockey, comedian and cruise staff host. He is the former co-host of Blab TV’s daily morning show The Daily Brew.  He has written five books and writes a weekly column for newspapers titled, Spears Makes His Point. In December of 2020 he is coming out with a book and motivational album with the same title Spears Makes His Point. Willie has spent time as a sports radio analyst and was also featured on ESPN's First Take Your Take where he debated Stephen A. Smith.

Originally from Panama City, Florida, Willie Spears graduated from Rutherford High School in 1996. He then attended Northwestern Oklahoma State University where he was a starting receiver for the NWOSU Rangers, winners of the 1999 NAIA National Championship, prior to earning his BA in communications. He also holds a Master’s in Education from Troy University.

Willie currently resides in Panama City, FL and Union Springs , AL depending on his work schedule.  He is married to Tanika and they have two children Tayelor and Kenneth.

Donte is a sought after motivational speaker. Speaking is a natural gift. He has the ability to captivate any audience, and his passion and enthusiasm are evident within each keynote. He is a phenomenal storyteller who delivers messages that provide hope and inspiration.  Donte believes that he is living out his purpose and God placed him here to add value to others. Donte has been happily married to Krystal for seven years.

Jimitre currently resides in Pensacola, FL and has worked as a videographer  for more than ten years.  He has completed several video productions including church events, plays, live concerts and many other events.  Jimitre earned his bachelor's degree in math education from Grand Canyon University.  For TWSE, he facilitates all video productions that will be shared with the world.

Tanika Spears is a certified counselor and teacher, a motivator, and an occasional speaker. She has spoken to church youth groups, prison inmates, schools, teachers, and individuals through The Willie Spears Experience and in her job as a teacher and counselor.

Tanika is originally from Panama City, Florida, where she graduated a year before Willie from Rutherford High School in 1995. She then attended Florida Agricultural and Mechanical University (FAMU) where she earned a Bachelor of Criminal Justice degree with a minor in Juvenile Justice prior to earning her Master's in Education.  Tanika served as a mentor in several Florida schools while in college and she continues this adventure to date.

For TWSE, she manages the flow of information between the company and the public, as well as books the company's engagements.

Tanika currently resides in Panama City Beach, FL with her husband Willie and their two children Tayelor and Kenneth.

Angelia Case resides in Alva, Oklahoma, where she is the academic projects assistant/media specialist  for Northwestern Oklahoma State University. For TWSE, Angelia  handles promotional, computer and artistic needs. Angelia majored in Art and has a Master's Degree in Speech Communication.

Valarie Case has taken hundreds of photos of Willie dating back to 1996. She is a PR Specialist for Northwestern Oklahoma State University, Alva, where she majored in mass communications and earned a Master's degree in speech communications.

For TWSE, Valarie writes articles and provides photography for promotional products plus some speaking and signing engagements.

Teacher of the Year finalist in local school (Escambia High)

Teacher of the Year finalist in local school (Escambia High)

4quartersonline.com Coach of The Year

Teacher of the Year finalist in local school (Rutherford High)

throughout the United States